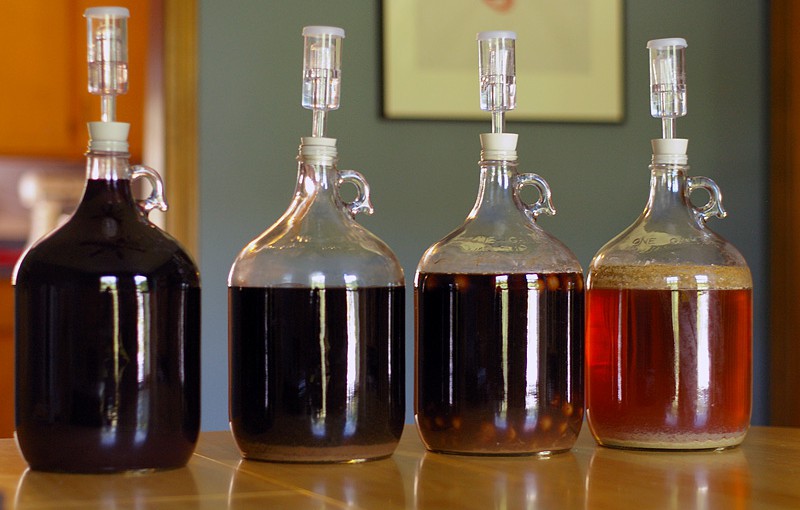 Advantages of brewing 1 gallon / 5 liters at a time

It can be done in a typical urban kitchen, with cookware most people already have

It takes less grain, so it’s cheaper and you can use expensive ingredients such as honey or maple syrup

You end up with about 10 bottles per batch, which doesn’t take much space, is easy to drink until next time and not a big deal if you don’t like the taste of your beer

Fermenters are light and easy to handle, a major advantage to get into homebrewing without moving a 50lb (25 kg) tank around

What is so revolutionary about brewing a gallon at a time rather than 5 gallons like homebrewers have been doing for decades?

Typical 5-gallon kits are complicated and ugly, most of the time based on malt extract (at least for the first batch), they dumb down the fun steps too much and focus on unnecessary ones that have limited consequences on the taste of your beer, disappoint brewers by often ending up with 5 gallons of undrinkable beer and don’t incite a cooking-like improvisation-based approach of brewing

For all these reasons, gallon brewing is a genuine revolution that opens craft beer making to many people, including a more urban population, by making it more fun, less heavy, better looking and more manageable

What is so cool about all-grain beer brewing? As opposed to traditional starter kits, which mostly consist in diluting malt extract in boiling water, gallon brewing kits allow to jump straight to all-grain brewing, which is the utmost brewing method, the same used in professional breweries, and takes brewers through all the steps of extracting sugars from actual barley grain themselves

After a first batch, following a recipe to the letter, you will have figured out the basic principles of all-grain beer brewing and want to start improvising your own recipes. More about this here Create small batch beer recipes
Thanks to small batches, beer brewing resembles more to cooking, with all the improvisation and personal touch that cooking allows If you ever tried a traditional brewing kit based on malt extract (which comes in cans and looks like caramel), you very likely ended up with a kind of soft drink with a remote taste of beer and huge Coke-like bubbles

This is because malt extract kits come with poor instructions, old yeasts (if not dead) and bottling instructions that cause oxygenation

Most of all, malt extract kits start very late in the brewing process, all you have to do is basically to dilute malt extract and bottle the beer, you don’t go through the most interesting and creative steps of extracting sugars from actual grain yourself

On top of taking huge space and being hard to handle, 5-gallon kits often leave the brewer with 50 bottles of undrinkable beer and a very bulky tank you don’t know where to store

Why a glass fermenter? Glass fermenters have all possible advantages:

They don’t release any chemicals into your beer

They don’t host bacterias in microcracks

They are transparent, so you can observe (and learn) everything that’s going on in your beer during fermentation

Can you make good beer? Sure!
You can make beer that both tastes better and has more body than many commercial beers as you have total control on the ingredients you put in your beer and can use some that are too expensive for commercial production, typically honey and maple syrup

You control the quality of everything you put in your beer and can make it fully organic for example. More info on How to brew organic beer

Not at all
The beauty of this new approach, based on small all-grain batches, is that it basically gets rid of all the unnecessary/complicated steps like adjusting water pH, mash steps, rehydrating yeast and so on, while focusing on the most fun ones that give more control on the final taste of your beer by starting a few steps earlier in the brewing process
Beer brewing has never been so easy and interesting and it’s now all-grain!

How much does it cost?

A kit costs $40 and that’s all you will need
It comes with all the ingredients for your first brew: malt, hops, yeast, sanitizer

For further batches, you will either keep relying on ready mixes (not fun) or compose your own recipes (super easy) and gather the ingredients yourself (fun, about 10 bucks)
We have detailed information on How to create beer recipes

Beer brewing is basically a poor man’s hobby and expenses never go through the roof, except if you start getting some semi-pro equipment for larger batches
Most of all, it’s such a consuming passion that any cost factor will quickly disappear from your mind and all you will care about will be to get the best possible stuff

It provides solutions to many details still unclear in instructions coming with 1 gallon brew kits such as the Brooklyn Brew Kit, as well as additional hints learnt by a total newbie through experience and reads

Passionate about beer brewing, I try a new recipe every other week and share my experiences in the blog section with my faithful readers

Latest posts by Brewer (see all)